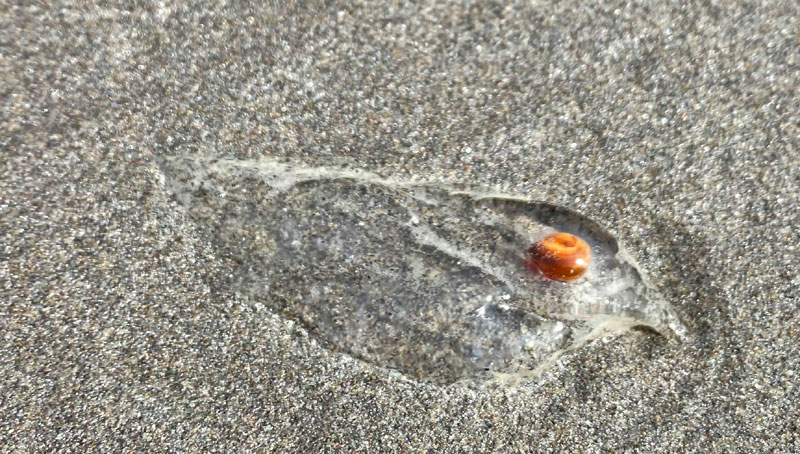 (Oregon Coast) – Up and down the Oregon coastline, visitors are chatting on social media at the moment about a puzzling find on the beaches. It’s blob-like, it’s hazy, and largely featureless – except for an orange chunk of something embedded in it. (All photos courtesy Seaside Aquarium’s Tiffany Boothe)

What folks are seeing right now on the Oregon coast is a salp (and likely the Washington coast as well), and it’s quite a run of them. According to Tiffany Boothe of Seaside Aquarium, it’s a critter that goes by the official name Salpa fusiformis. She said it can grow up to 1.5 inches in length.

“They are easily identified by their orange, hard cut sac,” Boothe said. “They often undergo daily vertical migrations coming up to the surface at night and diving down to over 1,600 feet during the day. While Salpa fusiformis is typically found offshore, occasional nearshore swarms do occur – like right now.”

The orange sac is its intestines.

They aren’t the only salps found along the coastline. Boothe estimates there are about 10 to 15 different varieties, but you see one type more often than others. So, that makes this one a bit of a different sighting and understandably unusual to many people.

“When conditions are just right populations of slaps may form massive swarms of millions of individuals,” Boothe said. “They are eaten by heteropods, medusae, siphonophores, ctenophores, sea turtles, marine birds and over 50 different species of fish.”

What exactly is a salp?

It’s not a jellyfish, although it’s got a gelatinous feel and look about it. They’re vaguely related to jellyfish but a closer relative to the fish.

Boothe said you first have to understand what a tunicate is to grasp the idea of the salp. Tunicates actually belong to same phylum as vertebrates, although as adults they don’t have a backbone. When they’re a developing larvae, they have a tail, a dorsal nerve cord, and a dorsal stiffening structure (not composed of bone) called the notochord.

“Because of this tunicates are thought to be more closely related to vertebrates such as fish and people,” she said.

A salp is a pelagic tunicate, which means they float along in the middle level of the water. 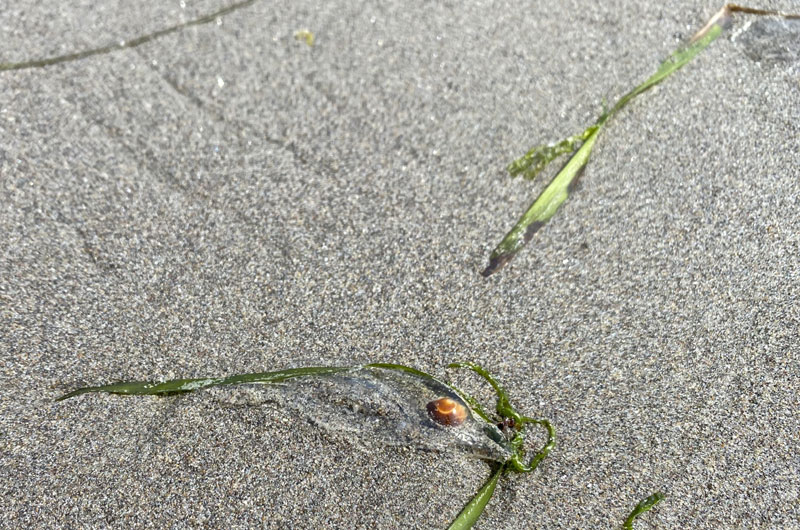 “They move by means of jet propulsion, and feeding is accomplished by pumping plankton-laden water through the body where a mucous net is used to extract food particles,” she said. “They can be found individually or in large aggregations consisting of millions of individuals.”

This aspect of a salp is not unlike another salp well known to people now: the wacky pyrosome. Those are the oddball tube-like things with bumps on them that washed up a lot a few years back. Salps can form colonies that are comprised of dozens to hundreds of them, reaching several yards long. Even more dramatic, they do this by cloning themselves: replicating dozens of versions of themselves and then forming that chain. This happens at one stage of the creature’s life, and then single bodies eventually start breaking away.

For more see A Rundown of Jelly-Like Salps of Oregon, Washington Coasts 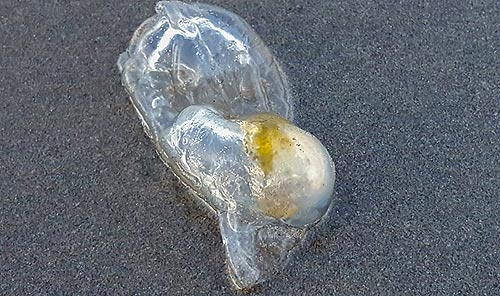 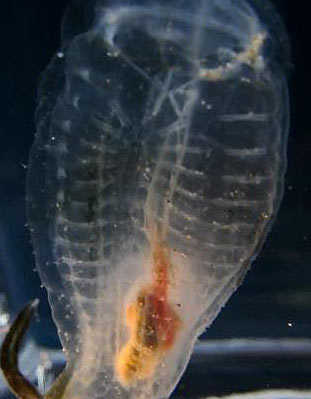 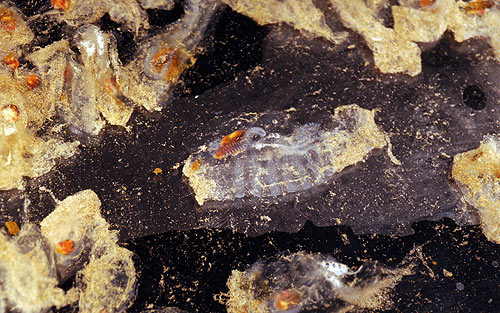 Back to Oregon Coast